"Children grow up I've learned to my sorrow, so quiet down cobwebs and dust go to sleep, I'm rocking my baby, cause babies don't keep."

How true that is. We've had some "big" events around here. Not huge, but silent markers of a life that is full and alive...and fleeting. The first was last weekend when Julia was ready to take the plunge and get her ears pierced. I was shocked by the look of sheer determination that she wore on her face while she climbed on that chair and got her birthstones punched through her little ears. I think I was sad. I love her ears, and I felt like they were sweet little baby ears. Then I wondered if I was allowing her to grow up too fast. Wondering if there was some spiritual conviction I should have regarding the right age and appropriateness of having ears pierced. I decided that no, I do not have any convictions, they are sweet and we love them, and she is adorable and growing faster than I like and more beautiful that I could imagine and I am full to overflowing with love for my Julia...and her ears. So, here she is... 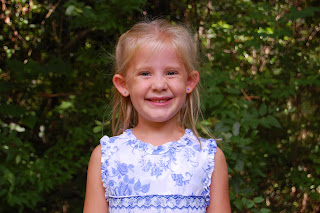 The other first for Ms. Jules is soccer. One of her sweet friends from church was playing and her father was coaching and the invited her to join them. When I first asked her she said that she wasn't interested, then I told her that Susanna was playing...then she couldn't wait. We are extremely thankful for friendships that the Lord gives our children now that we can nurture over time. Hopefully some wise friends that they can walk with...encouraging and spurring on toward love and good deeds...and having fun. So, Mike is the assistant coach and today was their first game and she did a super job! I'm not just saying that either! She ran hard in the correct direction and she wasn't afraid of the ball. I have bad memories of getting my glasses bashed in while kicking the ball into the wrong goal. Thankfully that generational curse has not fallen on my children. I'm serious about how thankful I am for that...for real! I made a special game day bow for her, and even though you can not see it, I love it...I love that it mattered to her. She matters so much to me. 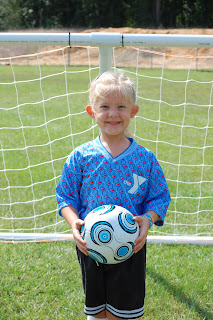 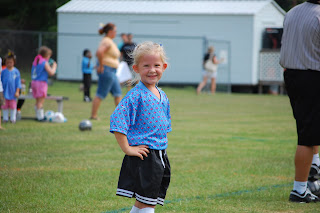 The last and craziest of all is our 3 "first" as we got a dog...again. For those of you who know us well know that we have struggled in the past. This time is SO different. We rescued a sweet guy last weekend and he has been such a wonderful addition to our family. I suspect this is what it is supposed to feel like to have a dog. He was pretty much crate trained and potty trained and just really thankful. With the risk of sounding nuts, I really think our dog knows he was spared. He and his litter were on their way to be euthenized when they ended up at a Pet Adoption Resource Center (PARC). It's like he knows what could have happened and he's just thankful. We are too. His name is Sonny and he is about 7-8 months old and is a lab-mix, maybe with hound of some sort. I will say that I had just e-mailed a friend and told her that he was so great and wasn't chewing anything and blah blah and then last night we were all sitting around the table and heard this noise and dismissed it and then it started up again and it was the dog GNAWING on the legs of the table! So, there are a few things I've thought about spiritually since having him, but for now, I'll just keep it simple. We got a dog...and it's pretty great. 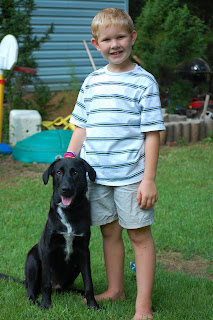 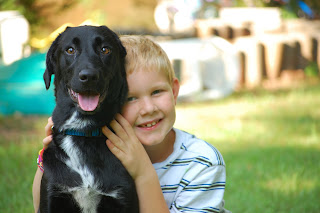 So, that's some news from here. Just life stuff...but isn't Christ in it all? Thankfully, He sure is. For from Him and through Him and to Him are all things. To Him be the glory and honor forever and ever. Amen!!!
Posted by Ali at 2:34 PM 2 comments: 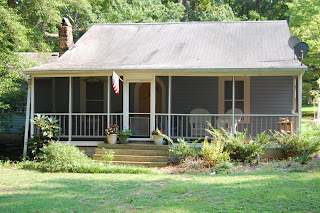 One of my favorite things to do, sort of, is look at other people's school rooms. I am not sure why that is so much fun to me, maybe because they all look so very different, but I got to thinking about my school room. Maybe I should post this on my other blog, but I hardly ever post over there, so I'm posting here instead. So, I thought that I would post a picture of my school room. What do ya think? I'll post more pictures later, but thought this would be a great start. Here's is why.

We are all homeschooling. The greatest lessons come from this place, for all of us. Some of us may spend a bit more time in our "school room" but we all have one. Don't believe me? Take a minute, walk out the door that you walk through when you are bringing in your groceries, then walk to where you get your mail. If you haven't gotten your mail yet, go ahead and grab it, then as you turn around close your eyes and then open them. That's it! That's your school room. As you walk back into the door you just exited get ready to walk into the most important place in the life of your family. Your home. Does your home have a smell? Not necessarily a bad smell, but do you know I can still smell things and say, "That smells like Oak Leaf Ct, or this smells like the Beach House." What do you hear in your home? I still love remembering walking into my home from college when everyone was home. It just feels good. Your kids love that place. Don't believe me? Tell them that you are selling it. They'll flip...or start talking of what they'll do with all the added space! The conversations that take place in the school room that is close to the oven and the fridge are big time. Some of the best conversations happen around that table, whether it's game playing, eating or pencils and papers. It's big.

I could go on. I just wanted people to know that you might not be a "home schooler," per se, but you also have a school room. It will look different from mine, but you are still the primary teacher. You are still the one that is in charge. Those children are still yours. We are all teaching our children. We are all loving them and hoping that they will grow to be passionate with a purpose and willing to invest in those things that are unseen and eternal. We all have a school room...everyone is teaching something, and everyone is learning something, from the school room in front of the mailbox through the door where the groceries come. What's your school room look like? What are you learning?
Posted by Ali at 12:48 PM 2 comments:

I do love Dr. Seuss. I haven't read him enough lately, but last night Ella was pretending to be a vet, and when I asked her what her name was she said, "Dr. Seuss." Pretty clever that little spunky thing! The other day we were, however, reading Yertle the Turtle and this line caught me. First let me say that Yertle is a very grumpy turtle that wants to be ruler over everything that he can see. In order to be a bigger ruler, he stacks more and more turtles on top of one poor Mack, and apparantly forgets why he is so tall. Listen,
"You hush up your mouth!" howled the mighty King Yertle.
"You've no right to talk to the world's highest turtle.
I rule from the clouds! Over land! Over sea!
There's nothing, no NOTHING, that's higher than me!"

As I read that I thought, "Yertle, you fool, you are only high because you are standing on their backs! They put you in that position and listen to how you speak to them!" I won't tell you how it ends, in case you want to find out for yourself, but here's the thing, anything that I am, or will be, is because I am standing on someone's back. I think of the great cloud of witnesses that have gone on before us, those Amy Carmichael's and the George Mueller's. The Livingstone's and Ten Boom's. Those courageous souls who were willingly and joyfully obedient and have paved the way for many believers to do some pretty super things for the glory of God. We stand on their shoulders. We stand on the shoulders of the One who took our cross on His shoulders and lugged it bruised and beaten all the way to Calvary. The relationship that I have with my Father, I have because of Him. May I never forget that and speak as harshly as ole' Yertle did, who eventually was King of the Mud. Hmmm. I've been there a time or two.

So, whose shoulders are you standing on? And who will stand on yours?
Posted by Ali at 5:43 PM No comments: