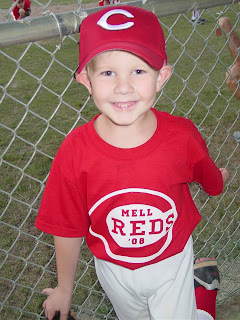 This is "The Boy." Because Anson is our first (only) boy, we thought that was a suitable name. It should come as no surprise when our next child was born, she was cleverly called, "The Girl." When we had our third baby, and second girl, we called her "The Smell." So, this is Anson. He shares my passion for a good book, a cozy chair, and people. I almost cried the other day because I realized that anything good that I have or am, he inherited. (I say that humbly...I just couldn't believe it!) (I'm not deceived, he also inherited Adam's sin...)

So, we decided that we would allow Anson to play T-ball again this Fall. He loved it last year, and two of his favorite friends were playing, and we wanted to nurture those friendships. So, GO REDS! Now, I mentioned the things that Anson inherited from me. Mike is an athlete. A good one. Anson is still young and a bit awkward, I'm not sure how much of Mike he got in that way. Mike and I sort of giggle about it because we don't care what he does. We know that he will be used in great ways by God. In any event, he's got heart. If you want a good sport, someone who will make it to every game and not complain when he's the only one in short sleeves (oops), you should pick him first. He doesn't fight over the ball (Mike wouldn't mind if he did every once and a while), isn't a ball hog, and will still love the game win or lose. He's got heart. If you want to win, well, it's not always about winning is it?

The other night we were watching him run on out to first base and Mike yelled "Cover the bag!" Anson never turned around, he just gave Mike a thumbs up from the field. My heart beat a bit faster. The coaches were closer than Mike was. The other boys were running and carrying on. In all the chaos on the field, Anson heard his Dad's voice. He acknowledged it and kept moving forward. Mike has been talking to Anson ever since the Baby Center told us he had ears. He would read the Bible, sing songs, and just talk. When Anson was born, and we had cell phones, Mike would call on his way home and Anson would smile when he heard Mike's voice. It was precious. As soon as Mike got inside he would say, "Hi Boy!" and Anson would light up like a Christmas tree.

He still does light up. Anson adores Mike, he listens and he respects Mike. The reason he does is that Mike has been a constant. Mike is trustworthy. Up to this point, Anson doesn't have any reason to distrust his father. Mike has been kind, and loving. He has been just and merciful. He governs the kids with mercy and wisdom. In short, he's a good father.

So is God. I have mentioned several times (or at least once)John 10 in which Jesus shares with the Pharisees concerning the Good Shepherd. He makes it clear that the Good Shepherd knows the sheep by name and the sheep know His voice. I am just as guilty as the next struggling beggar of looking for "open doors" in order to know "God's will." or be certain that God really said what I think He said. When we don't see an open door, maybe it's just cracked, or perhaps we start praying that God will open a window that we can climb through and open the door. Surely that would be O.K. Right? Do you know what Jeremiah 33:3 says? We used to have it hanging up in our dorm room, "Call to me and I will answer you and tell you great and unsearchable things you do not know." I'm thinking that's an answer. Now, every time someone mentions this, we think, "Is it audible? Am I missing it? Do I need my hearing checked?" Now, I'm no theologian, but I believe that God uses His word and His Spirit.

Several weeks ago in a Sunday night service at church the Pastor read from Psalm 68, "God sets the lonely in families." I knew exactly what He was saying to me. My Spirit had been prepared by worship and the hearing of His word, and I knew of a friend that I needed to include more deeply in my life.

I knew that I knew that I knew it was the Lord. Maybe you are new to the faith, maybe you are skeptical of "hearing from God." Anson only knows Mike's voice, and is attuned to it because of the massive amount of time he has spent with him. He knows that sometimes he sounds like someone from Pennsylvania, sometimes he gets anxiously loud, and that his laugh is hysterical! Spend time in God's word. Make it a point to study, to memorize. Make Bible Study with others a non-negotiable part of your week. Honor the Sabbath and keep it Holy. I guarantee that you will begin to "hear" from God. You will not need to trust in "signs and wonders" as much because your Spirit will be sensitive to the answers that God gives you. Just listen, be aware, and before you know it, His will be the only voice that you hear even when the rest of the world is loud and chaotic.
Posted by Ali at 1:17 PM

Oh those T-Ball days - miss them - will have to wait for grandson, Nolan, to try his hand at it!! What a little man Anson is (printed the picture to take to Great Grammy - she does enjoy them). I do look forward to your "writings"!! Such good lessons you pass on. I will be watching for the next "Cup" to fill me up. Oh, yeah, waiting on the book list! Hah Keep up the good work - Lots of Love, Aunt Ness

What a cutie Anson is! I love little league. If they had fall ball around here, both my boys would be playing too. Good post....as always.