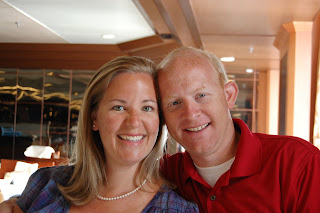 "This is such a buzz-kill."
"Seriously, how long does it take to tell people to bend over and kiss their *hiney* good-bye."

Mike and I will celebrate our 10th (can you believe it) anniversary this July. This past weekend we went on a 3 day cruise with my folks who were celebrating my mother's (final) retirement. So, for those of you who have never cruised, you aren't required to do ANYTHING on a cruise other than what you want. EXCEPT for the mandatory meeting to go over what would happen should the ship begin to, well, go under.

These folks seemed nice enough. They were ready for a good time and not super pumped about this mandatory meeting. Their drinks were fresh and their party was getting started! To listen to them I thought, "You must not have children." I do want to see Jesus, I do, but the thought of dying and knowing I was leaving my children behind grieves me. I was totally paying attention. I wanted to know where my life jacket was, where the little light was on it so that someone could rescue me. Where I needed to meet to get on the lifeboat...I wanted the facts. I've seen Titanic...things happen!!! As these people mocked the demonstration my heart sort of sank for them, and those who have mocked other demonstrations before.

I thought of those who find Christ to be somewhat of a buzz-kill. He just comes in, demands their time and ruins all the fun. Such a party-pooper that Redeemer. I thought about the people who have given their lives that others would know, and how they were received...as foolish and unrealistic. To these folks sitting behind us the boat would NOT sink. They are NOT going to die. They are going to live and have fun and it's gonna be awesome. I know the Truth. I know that we do need to pay attention. We do need a Redeemer. I do need a life jacket because I'm on a sinking ship.

I thought about Noah and how he was declaring the coming wrath and warning the people for what, 150 years, that they should get a plan together. What kept him hammering one nail after the other? He believed. He knew God. He knew that whatever the rain looked and felt like when it fell, it wasn't going to be good.

So, I didn't share the gospel with these people. I did watch them at other times, though, to just see if they were still having a good time. It was good enough, I suppose. Perhaps a bit empty when the buzz did wear off...I don't know, I'm not them. I have been. I've had some super awesome times. Really, really fun. There was always a let down, though. Always a nagging feeling in my heart. Always a voice whispering that my ship was leaking, slowly, steadily.

I don't want to find Christ as a buzz kill. Sometimes I think maybe I do. When I'm convicted about music or movies or even TV shows that others aren't bothered by. I'm like, "Seriously, Lord, a little fun wouldn't kill me." Perhaps it would. That's such a painful realization. To believe that whatever I could find "fun" would be more fulfilling than anything that the Lord would have for me. Really? That's silly.

So, I'm not quite sure how to end this, only that for me, I want to be really living...robust and full...to let the watching world know that Christ is not a buzz kill. His boundaries bring life to my bones. He satisfies me in the morning with His unfailing love and because His love is better than life, my lips will praise Him. I want to want to forget what is behind and press on toward the goal, the prize that Christ has called me to. Oh, Father, grant me grace that I might do just that. Help me to listen to you with open ears and a quiet heart and rejoicing in the only One who can truly save me from my sinking ship. Amen
Posted by Ali at 5:50 PM