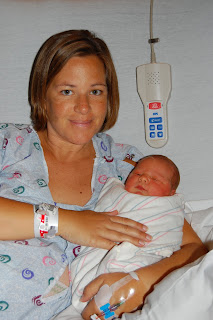 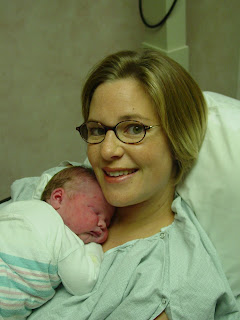 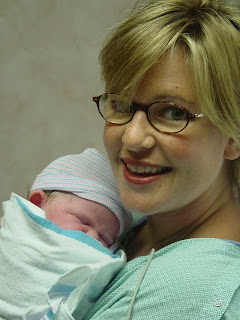 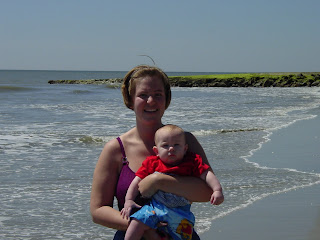 No, I only asked Jesus into my heart once, I know I don't need to be born many times! This is the last day of birthday season for us. Well, there is one more birthday in November, but as far as the kids go...today was the last day. Today Ella turned five. She got to get her ears pierced and was a little nervous that she might not be five tomorrow. She is too funny. This morning we didn't have to pack lunches for co-op, so we had some time. I found the DVD from her first birthday and also a disc Mike made of pictures of her birth. I looked at myself in those pictures and as unselfishly as possible I thought, "That day was about me, too." I was born again. With each child something new births in me. I am not the same. The minute they show me that little person I become someone new. I have to change to accomodate the new role. I have to bend to my new responsibilities. I become a little more who God made me to be. For example:

Anson: I became a scheduler. I LOVE to fly by the seat of my pants, but I became the nap nazi with my little man. I wanted to be sure that he slept and ate and "waked" when he was supposed to...and he did! My joy was intensified with every new day. He was happy and compliant and smart! Not to mention a good lookin' boy. I became a Mom with Anson. I began learning about small pieces and taking temperatures and getting up from a dead sleep to make sure that all was well. I watched Three's Company in the middle of the night and mourned when John Ritter died because he had become a friend to me during those late night feedings. I became convinced that I could not balance working outside of our home and became convinced that I was made to be a wife and a mother. I was in love.

Julia: I became a task master. I always had to be just a little bit ahead of those two. I needed to have lunch ready before they were and get them to nap before we all fell to pieces. I became more feminine than I realized. I figured out how to make bows and I made them...a lot of them! She got sick with a nasty bone infection and I became an advocate for my children. I realized that no one is going to speak up for them but me. I became a little crazy. My anger emerged and I realized I scream. I became the woman that I had judged for so long. Anson didn't prepare me for tantrums. I became normal.

Ella: I became rather busy. I learned how to cram many people into my lap to read books and realized that bed-time was for everyone. I realized that I need Jesus to control my temper and that little girls with curly hair are nuts!!! I became a Mom that had to start thinking for others and spreading my time a little bit. I had to start deciding what was the best way to spend my time because I didn't have very much of it anymore. I became submerged in my world of Mom. Parks and playdates and libraries oh my! I loved it...and struggled at the same time. I began wishing for the "easy" days that I was sure were before me. I longed to sleep until my body woke me up and struggled sharing myself. I learned that Jesus is the only way and that when my children see me ask for forgiveness they begin to understand that Jesus is for everyone. I became a discipler.

Caroline: I became thankful. I welcome the mess and the night feedings, the tantrums (we don't have those yet which is why I can say bring it on...my memory fails me a bit). I became aware of how fleeting this life really is and that I do have time to watch my baby smile and talk and even wash diapers. I have time right now. This is the only time I have and I want to wring it out and relish every dirty, stinking, wonderful minute of this 24/7 job. I think that I am becoming a mother. Slowly. One person at a time. God is shaping and molding me more and more into a Mom. Yup. I'm just plain thankful.

With each child I feel as though my emotions are intensified a bit more. My joy, my anger, my fear, my contentment. Good or bad I feel more intensely. I love them and hate sin which threatens them on a daily basis. It's bizarre how they have changed me. Or maybe they haven't changed me. Perhaps they have developed me. They have been used by God to mold me more and more into who I was really already. The person that I was molded to be. With His help and for His glory I pray that I fully become Alison Wessner. I hope these kids like what they have helped create!!! :)

Note: The pictures are NOT in order. From top to bottom they are Caroline, Ella, Julia and then Anson. I didn't have a picture of Anson with me in the hospital. They were on another site that dropped them in a dark hole somewhere in the cyber world. Hmmmm
Posted by Ali at 6:55 PM