So, we've been home from camp for not even two weeks.  In that time I have planned and started school and Mike and I caught a documentary this week that has inspired us!  I know that beauty isn't what's on the outside.  I'm totally for that.  With 3 girls, I try to keep my personal critiques to myself, but let me say that Camp Marannook serves some AWESOME desserts...and sometimes they show up twice a day.  Now, I didn't want to miss out on any of them...so I didn't.  So, um...anyway...I don't feel well.  I feel bloated at the end of the day and just plain blah.  I am NOT BLAMING MARANNOOK!  They didn't make me eat them.  So, I love Camp and it didn't make me feel blah.  Promise!  Also, Ella has been complaining of chronic headaches and we feel like it's time to do something.  She does have an appointment early September, so I wanted to try to see some improvements before we went a medical route.  So, the documentary that we watched?  Fat, Sick and Nearly Dead.  The quick and dirty is that Joe Cross was just that, Fat, Sick and Nearly Dead.  He went on a 60 day juice fast and is currently living a happy and healthy life pain and medication free.  It makes sense.  If you put good things in, your body will function properly.  We've not been fabulous about putting great things in.  So, after the documentary we both looked at each other and said, "Let's do it!"  That was Wednesday!  So, we are borrowing a juicer (Thanks, Marti!  You're next!!!) and just took all four children on the grocery run and are now having, um, Peanut Buster before we go to bed!  Don't judge me!!!  I'm afraid I won't want it when this is over, so I'm enjoying it now. (Funny thing, it's a Marannook recipe!) In the quiet of the night.  So, I thought since I hadn't blogged in a long time, I'd do my own little documentary right here.  That will be a stretch for me, but I want to share this little adventure, hoping maybe someone else will get up the courage to "reboot."  So,  I was going to blog this and then publish it when it was over so that if I crashed and burned no one would know.  I think that's part of the adventure...so welcome!  I'll be back tomorrow with the verdict on Day 1.  If you are interested you can watch Fat, Sick and Nearly Dead for free with Amazon Prime, or I think you can pull it up in pieces on youtube.  Also, the   website where you can get details on a juice fast and even a pretty planned out day to help with the level of success!  So, here's to loving the Lord with my heart, mind, soul and strength!!! 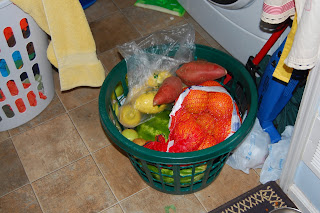 We have a bit of a "storage issue" so food that doesn't need to be refrigerated...lives here. 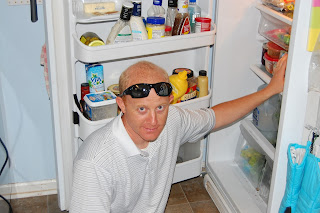 I cannot tell you how thankful I am that Mike's brain doesn't work the same as mine. I told him I'd do bedtime if he'd organize the food!  I totally got the better end of that deal!  Except I did end up washing the dishes from the leftovers.  But the fridge... 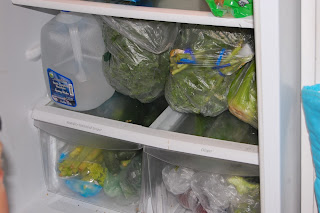 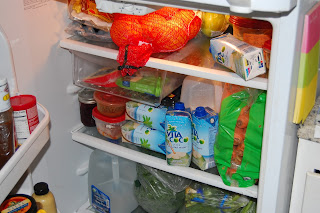 This should get us through the first 6 days.  The milk is for the children, that's not part of the fast. 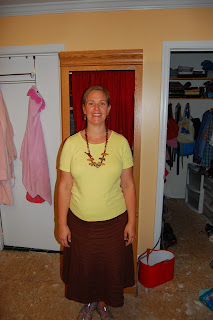 So here is the frontal view.  Mike was sad that it's not a typical "before" picture.
He said I should take my jewelry off and not smile.  You know, like they always do in those makeovers.  Also, if you are looking close you'll notice there are no floors in my bedroom.  One thing at a time around here! :) 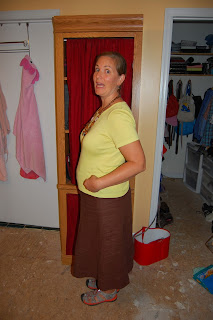 Some people look like this when they've just found out the gender of their baby!!!  I'm NOT pregnant (I wouldn't mind...but that's not a baby!) 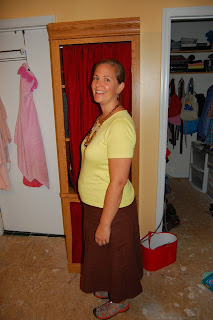 It's weird seeing my bedroom on here.

So, that's all for now, folks.  I'm really putting myself out there.  What if I look the same in my after pictures!  Even if I still have the same clothes on? Maybe I'll wear the same clothes so that we can see a difference.  It'll be a surprise!  Well, I'll be glad that we gave it a shot.  And I don't think it can hurt!!!  Thanks for stopping by!